Andrew Bogut has had quite an up and down career in the NBA, especially considering how highly he was picked in the draft in the early 2000s. Based on his draft status, it was expected that big things were in store for him in the league, though things don’t always pan out the way you think.

However, after making a stint in the professional league of his home country, Australia, Bogut has rejoined the NBA as a member of the Golden State Warriors. Not a bad place to land! Upon his return to the United States, it was noticed that he is looking a lot more trim than he did in his earlier playing days. So what’s his secret?

How Did Andrew Bogut Get In Shape?

You might be a little surprised by the answer, but he has said in interviews that he made minimal changes to his diet when moving from the U.S. back home to Australia. The only thing he could of that was different was the introduction of a lot more beer!

As quoted by Bogut in The Athletic:

“I don’t feel much different and I haven’t changed anything specific diet-wise. Honestly, man, when I go back to Australia, I introduce a whole lot more beer to my diet. So maybe that worked. I have one or two beers with the family at night.”

Who would have thought that would be the secret to his success in losing weight? I’m not sure if that is entirely the reason why he is slimmer than his earlier NBA days, as he goes on to cite the more friendly playing schedule in the Australian league as helping his body as well. Whereas an NBA team may play 3, 4, or even 5 games per week (plus all the toll that travel takes on the body), the Australian league only plays 1 or 2 games per week, all of which are on the weekend. 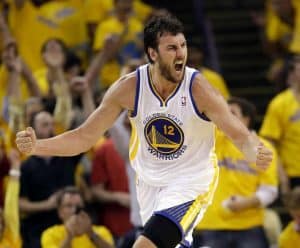 Making sure that you get time between workouts to recuperate and recover is absolutely vital for your health. It is why pretty much any workout program (like this one from Jim Stoppani) carefully lays out the workout schedule with rest days, and why you should adhere to the schedule.

On top of the time off helping his body physically, it makes a world of difference mentally and emotionally as well. Bogut commented that he enjoyed spending more time with his family, knowing that he would be home Monday through Thursday every week. This reduces stress and helps you center yourself, the mental aspects of which can lead to better health and wellbeing.

Is This For You?

I can’t come out and say that drinking more beer and only working one or two days per week is going to help you lose weight. Actually, I would say the exact opposite. But, it seemed to work for Bogut. We’ll see if after a couple more seasons in the NBA if his weight balloons back up to his earlier playing days or if he is able to keep it off. Either way, it’s been great to see him make a comeback and an impact in the league again!