If you are looking for the best probiotics for weight loss, I’ve got you covered.  After finally accepting that a probiotic supplement would be a healthy addition to my never-ending quest to lose extra body weight, I really dug in and started researching this topic.  I even went as far as consulting with Dr. Mathew Cooper, whose experience in enzyme therapy runs very personal.  His findings on the topic have been seen in ABC News, ABC Morning News, Fox News, CBS News, Ocean Drive Magazine, Hamptons Magazine, and Miami Magazine, to name a few.

What is a Probiotic?

The scientific meaning has been defined as “live microorganisms that, when administered in adequate amounts, confer a health benefit on the host.”

Essentially, they are live bacteria and yeasts that are incredibly good for your digestive system.  When we think of the word “bacteria,” often times we revert our thoughts to things that have germs and create diseases.  In reality, our bodies are stocked full of bacteria of both good kinds and bad kinds.  The “good” kinds are often referred to as probiotics due to their ability to keep your gut health in check.  This is VERY important because our guts need to be cared for the same way we care for our brain.

Before we get into the top probiotic supplements and where to buy them, let’s talk about gut health.

The old notion of “you are what you eat” could not be truer these days.  The types of foods you 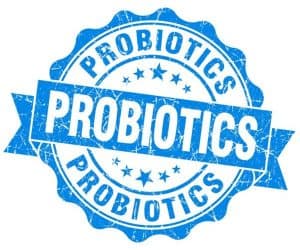 put into your body are going to have the largest effect on how healthy your gut is.  When you eat clean, you ensure that you maintain the health of your gut’s bacteria.

Evidence is pointing to our guts being akin to a “second brain.” When you think about it that way, doesn’t it make sense that you treat it with the same care you treat your brain with?  There are more nerve connections from the gut to the brain than anywhere else in the human body!

The gut is what feeds our brain and accordingly, it’s responsible for affecting our immune and nervous system, sleep, energy, focus, and general well being and mood.  Additionally, it’s also directing several other body functions in our bodies including obesity, anxiety, constipation, depression, autoimmune diseases, neurodegenerative disorders, inflammation, and oral cavities amongst other disease states.

This role isn’t small, in fact, it’s a very significant role.  They also have been proven to assist in weight loss, which of course, all comes back to the gut.

The best probiotics will do the following:

The best way you can attack gut health is to follow these three steps:

Note: You should be age 14 or higher to start consuming probiotics.

There is a good reason that you are hearing about these supplements frequently – they have loads of benefits!

Whether you add them in the form of foods, or supplementation, the benefits of probiotics are plenty.

Most commonly, people use them to assist in regulating digestion.  You’ll find that many users complain of irritable bowel syndrome (IBS), diarrhea, or constipation.  As an added bonus, gas and bloating can both be solved with probiotics.

Some of the less common uses of probiotics are:

As an aside, people have also mentioned that if they consume them regularly they are much less prone to catching a common cold.  This legitimizes the old saying that 80% of the immune system resides in the digestive system.

Of course, my main reason to be so supportive of these supplements is that they really do assist in weight loss.

The most famous study was done in Japan, where more than 200 people who were considered overweight participated in a controlled study.  They consumed seven ounces of fermented milk on a daily basis for 12 weeks.  A handful of the participants did so with probiotics added to the milk, while other participants did not.

When the study concluded after 12 weeks, the people who consumed the probiotic fermented milk reduced their visceral fat by up to 9%.  This is the fat that personally bothers me, the stuff that surrounds the heart and other organs.  It’s legitimately the most unhealthy fat you can have on your boy.  When you are told you have a large amount of visceral fat, it’s not a good thing.

The studies concluded with researchers believing that the drop in weight was due to the added organisms that were literally consuming the excess nutrients and calories that the person isn’t in need of.

Remember, however, that just using these alone won’t be a sufficient weight loss.  You need to add some basic exercise as well as start eating a healthy diet.

How to Buy a Quality Probiotic Supplement

Many of the best quality products you can buy share the same characteristics. Of course, I’ve rounded up the ones I have tested below and offered my personal reviews, but in case you want to go rogue and take your research elsewhere, you should look for the following when you make a purchase:

A prebiotic is a nutrient that helps feed bacteria that already lives inside of you. Sounds creepy, I know.  However, if you look for a product that has a prebiotic, you’ll know you have a winner.

If you opt to buy probiotics online (which I do), make sure you that you don’t need to refrigerate the product.  Don’t worry, you don’t need one that has to be refrigerated, the ones I use work very well and don’t require that. I’m just looking out for people who may go with an alternative supplement.