When looking for a well-balanced diet, Cayenne peppers are more than a good place to start because of their vast health benefits. In this article, we will go through what people consider to be the king of medicinal herbs.

Cayenne Peppers And Their Health Benefits

Being closely related to jalapenos and bell peppers, Cayenne peppers were grown originally within South and Central America and were later brought to Europe during the 15th century by none other than Christopher Columbus. Cayenne peppers are a very well-known spice that is used in many different styles of cooking. Along with its tasty attributes, it has been a medicinal additive for thousands of years. With such a strong popularity, the Cayenne herb carries a tremendously impressive nutritional value for those who require more than a stop at McDonald’s. One single tablespoon (5 grams) of this  herb contains the following: 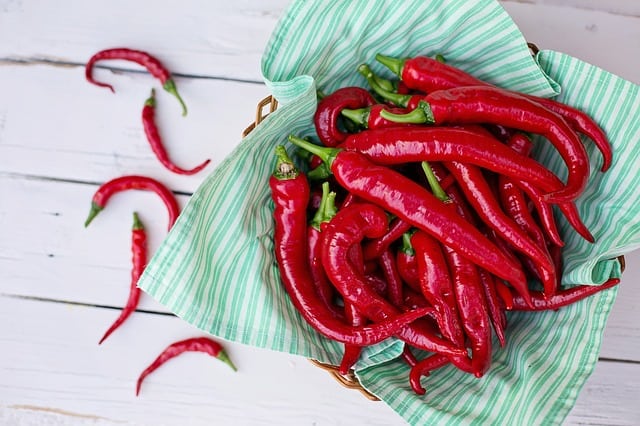 Capsaicin (the active ingredient in cayenne peppers) is the main ingredient in which provides the peppers with their heavy medicinal properties.

#1:  Metabolism-boosting Properties – The effect of capsaicin on the metabolism is small – in a study conducted, people who ate 1 gram of red cayenne pepper burned 10 more calories than the other subjects. Nonetheless, the increase is there.

#2:  Reducing Hunger – You won’t want to continue eating a whole lot after your mouth has been lit on fire.

#4:  Assisting Digestive Health – Cayenne peppers may reduce the occurrence of infections, increase the amount of digestive fluid produced and help send enzymes to the stomach (similar to how a probiotic works).

#5:  Relieving Pain – Being applied to the skin, capsaicin cream helps reduce the substance P (a neuropeptide produced from the body that signals pain). Such uses of the cream are available for joint and muscle pain, pain from surgery, back pain and pain from shingles.

#6:  Improving Psoriasis – An autoimmune disease with no cure, psoriasis symptoms have been shown to reduce under the use of capsaicin cream, reducing redness, patchiness and scaling for users.

#7:  Reducing the risk of cancer – Studies have shown that the ingredient capsaicin can slow down the growth of cancer cells and even cause the death of cells in multiple forms of cancer including skin, prostate and pancreatic cancer.

#8: Easy to Add to Your Diet – All it takes to spice up your diet with the great taste and benefits of Cayenne peppers is to add a pinch of the pepper spice to your food and nothing more. There’s nothing better than not having to work hard for something you want immediately.

As you can see, there are many reasons why cayenne diet pills are becoming trendy.  With all of the research behind this magical herb, it’s easy to see why it can have an influence on some of the top weight control supplements for sale these days.

Of course, you can always add it to your food or beverage, but be careful – it’s spicy!

How Much Weight Can You Lose With Cayenne Pepper?

As with anything, there are always all sorts of variables that will come into play. Women can experience the cayenne pepper health benefits (according to a 2003 study) like a raised metabolic rate for almost 30 minutes after digesting it.  The metabolic rate has a direct effect on the velocity at which your body is able to take stored food and convert it into energy.  With a faster metabolism, you are much more prone to convert nutrients into energy rather than remain as stored fats.

You will also see that your body can burn more calories after the consumption of this herb due to the fact that it’s spicy.  As your body heats up temperature-wise, you’ll see it go into a cooldown status.  This status allows your body to burn calories.  A study done in 2011 discovered that people who don’t enjoy eating spicy food had a boost in their attempted results to lose weight when they started supplementing their diet with cayenne capsules.

The human body is said to have a tolerance to red peppers normal effects.  Accordingly, if you constantly consume supplements or eat spicy peppers, you could see a plateau in your weight loss results.