When you think of athletes who need to maintain a strict diet and fitness regimen, you don’t often think of pro golfers. Large men such as John Daly and Craig Stadler have shown that success can be had in the sport when you’re overweight, that it had given the stigma that one doesn’t need to be a top athlete to compete.

Tiger Woods came onto the scene in the 90’s as a scrawny teenager but changed the complexion of what a pro golfer looks like when he bulked up in the 2000’s and many other golfers, looking to emulate his success, followed suit.

In this edition of celebrity diets, we take a look at what one of the top golfers in the world, Dustin Johnson (aka DJ), does to keep his body in shape.

What is Dustin Johnson’s Diet?

While the topic of this page is his diet, it is worth mentioning how he altered his fitness schedule as well. In an interview with GQ, he detailed the changes he made in his workout routine. He used to be pretty cavalier about working out. He’d go hard at it for a few weeks, then take a month off, never really sticking to a consistent schedule. At the end of one season, he decided to hire a personal training and get on a regular workout routine.

His reasoning was that golf is just as much a mental game as it is a physical talent. You need to be on your game mentally and maintain focus. You need to be consistent. He found that keeping a consistent training schedule, with no peaks and valleys in his fitness, helped him stay mentally tough and focused with his golf game. 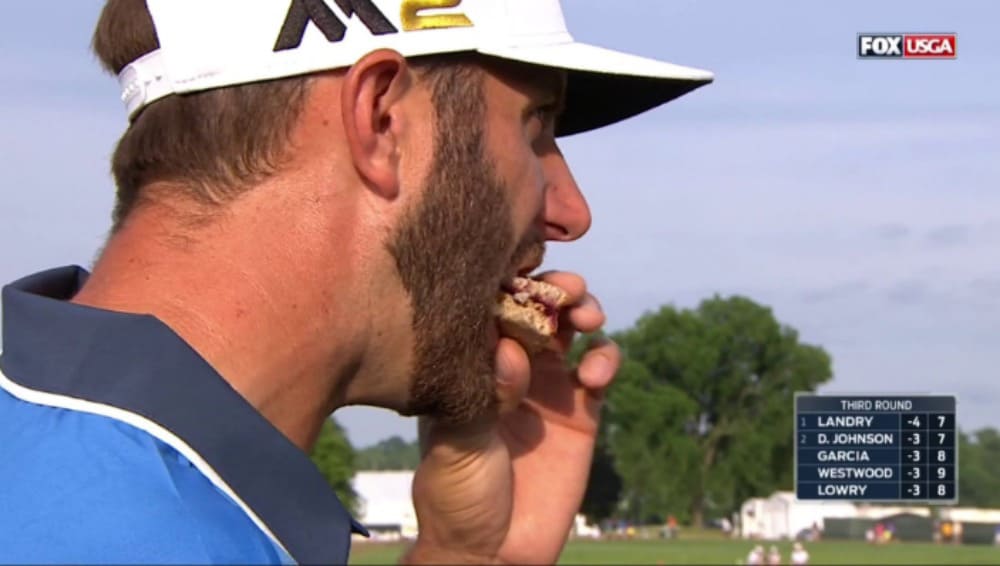 DJ describes his nutrition as starting off the day with a breakfast consisting of oatmeal and berries (typically strawberries, raspberries, or blueberries). He may also have an egg white omelet served with some quinoa.

Before he gets to the golf course, he eats an almond butter and jelly sandwich. During his rounds, he likes to have sports drinks with him and if he does any snacking it’s usually a protein bar.

Once he is off the course, he replenishes himself with a healthy snack (though it’s a bit of a meal in itself). He likes to have a bowl of quinoa again, makes sure he gets plenty of veggies, and a protein that is usually chicken or fish. When it’s time for dinner, it’s more of the same – fish and vegetables along with brown rice or quinoa.

Why This Diet Works

It’s obvious that Dustin Johnson eats very healthy, and he is getting a great blend of lean proteins and healthy carbohydrates. The proteins help him maintain his athletic build by repairing his muscles that go through immense stress over the course of playing 18 holes (not to mention his workout routine outside of golf), while the carbs give him fuel to get through his rigorous schedule.

There is a lot to admire in DJ’s diet and you need not be a professional athlete to follow a nutritional plan like this and keep your body healthy. It’s easy to see why he has been able to maintain such an athletic build and make his sport look so effortless. Take some tips from him if you want to look and feel healthier!