When you think of saturated fat, you generally think of all that you’ve heard about it being unhealthy for you. It’s just going to give you cholesterol and increase your risk of having a heart attack, right? Is it really as simple as that though? What if I told you that the truth is not so cut and dry? Could there be good fats for you? I’ll answer these questions below.

Before getting into whether it is good or bad for you, it is helpful to give a little background on what saturated fat is. All fats are macronutrients, which means that we consume them in great amounts and use them as energy. Each molecule of fat is comprised of one glycerol molecule as well as three fatty acids. There are three kinds of fatty acids: saturated, monounsaturated, and polyunsaturated.

The difference between these types of saturation is the number of Fdouble bonds within the molecule. There are no double bonds in a saturated fat, one double bond in monounsaturated, and two or more in polyunsaturated. 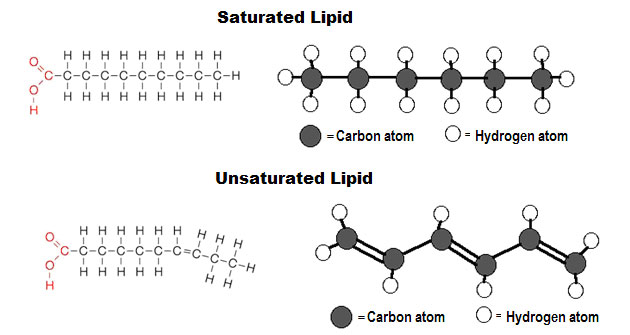 As illustrated above, a saturated fat has all of their carbon atoms fully saturated by hydrogen atoms.

Let’s get past the science and get to something more familiar. What kinds of foods have these saturated fats? You can find them in fatty meats, dairy products (especially full-fat) like cream and butter, lard, coconut oil or palm oil, and chocolate, just to name a few. It is worth noting that all fats have a mix of different kinds of fatty acids.

Are They Good or Bad?

After an endemic of heart disease in the last century, researchers began looking for the cause. They determined that it was a result of high cholesterol, and traced it back to the consumption of saturated fats.

But, the data wasn’t that reliable. There were no human tests performed, it was all hypothetical based on animal experiments and observational data. However, the word was out and taken as gospel. It became a common belief that if you want to avoid heart disease, stay away from saturated fats.

What’s important to understand, however, is that not all cholesterol is bad. It’s just a common thinking that it is. There are actually “good” “bad” kinds.  Saturated fats actually contain healthy fats, and also promote the transition of bad cholesterol to good! While they do introduce some of the bad kind, they change enough of the existing bad kind to good and can actually REDUCE the risk of heart disease, according to healthline.com.

In the end, after numerous studies that were much more thorough than those conducted in the 20th century, one thing was clear. When examining the relationship between saturated fat and heart disease, it was found that there was no correlation between the two, and the myth was busted. The general public still has the stigma of it being bad, though that is likely to change with further promotion of these new studies.

For all of our resources on health and nutrition, return to our homepage.