When you look at any of the supplements on the market today, most of them contain ingredients that are plant-based and have been used medicinally for centuries. One such ingredient that is commonly found in testosterone boosters is called Tribulus Terrestris. This plant is said to have many benefits that make it great for increasing your t-levels.

There are a number of health benefits associated with this plant. These include a regulation of your blood sugar and cholesterol levels, changes to hormonal levels, as well as an increase in libido and sexual function. 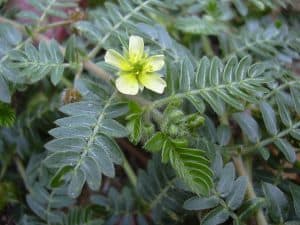 Before I get into that, let’s detail what exactly this plant is first. Tribulus terrestris is a leafy plant that can be found in areas of Europe, Africa, Asia, as well as the Middle East. It is also known as puncture vine, caltrop, Gokshura, and goat’s head. The whole plant, as well as its root, have been used for medicinal purposes in traditional Indian and Chinese medicine for ages. Most often it has been used to enhance the libido, maintain a healthy urinary tract, and to lessen swelling and inflammation.

Today, you can often find this ingredient in many of the top testosterone boosting supplements. However, research is inconclusive on whether this is the case. Further studies are needed to prove the full benefits of this ingredient when it comes to testosterone levels. There has been some promise when conducted on animal subjects, though more research is recommended to determine its human effect.

While there haven’t been clinical results showing that this plant can increase testosterone levels, it has shown that it can have a great effect on the libido. In one study on men with a low sex drive, they were given a supplement of this plant over the course of two months. By the end of the study, their sex drive (though I admit I do not know how that is measured) increased by 79%, almost doubling.

Similar experiments have been conducted on women with a low sex drive and found an increase in sexual desire, satisfaction, and arousal after supplementation with Tribulus Terrestris. In other studies, there has been a significant improvement in erections and sexual satisfaction among men who take this supplement.

While this ingredient may not help to raise your testosterone levels and build muscle, it does have a lot of use in sexual health. Part of taking a t-booster is to raise your energy and libido, and Tribulus Terrestris does a phenomenal job in achieving these goals. I don’t recommend taking this supplement as a standalone product, but it will work great as a complement to a top t-boosting formula such as that of TestoGen, my #1 recommended testosterone booster which you can read about here.