Ok, when you think about someone getting caught up in a doping scandal, you are probably thinking of an endurance sport like cycling, or perhaps a fast-twitch muscle fiber sport like track and field.

But in some weird news that I came across today, the world of competitive bridge (the card game) was thrown for a loop when the world’s top player, Geir Helgemo, has been ruled ineligible to continue play after he failed a drug test. What did he take that caused this suspension? You won’t believe it.

After taking a drug test at a World Bridge Series event in September of last year, it was found that there was (as they put it in this article) an “Adverse Analytical Finding.”

Basically, that’s just a fancy way of saying that he failed his drug test. There were substances found in his body that should not be there. 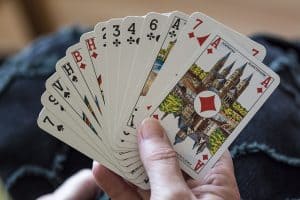 In the case of Helgemo, they found two banned substances after analyzing his results. The first was synthetic testosterone. The second was clomiphene. The list of banned substances is maintained by the World Anti-Doping Agency (WADA), which is adhered to by the International Olympic Committee and the World Bridge Federation (WBF).

Given that he failed his test, a suspension was passed down on Helgemo as well as other ramifications. First, he is suspended from participating in WBF events for one year (expiring on November 20, 2019). He must also surrender any titles, medals, awards, and masterpoints that he earned in competitions in 2018. On top of that, in competitions where he played on teams, the team is now disqualified. However, as his teammates were found to have no fault, they are able to keep their medals, awards, and points of a second place finisher. Helgemo also must repay the federation the cost of his hearing.

So this is a weird story. Why would a card player get caught up in a doping issue? It’s not like he is an athlete, in the traditional sense of the word. He doesn’t need to be strong or fast, and testosterone boosters (like Prime Male reviewed here) is typically linked with muscle growth and increased athletic performance.

However, there are also a lot of mental benefits that come from taking such a supplement. When you take testosterone boosters (like these I review), you will probably find that you have a lot more mental clarity and an enhanced focus. I’m not entirely familiar with competitive bridge playing, but I imagine it as being a marathon of card playing, much like the World Series of Poker. You’re probably sitting at a table for a long time and maintaining your focus throughout is key. For that reason, I could see why testosterone would be helpful.

In any case, it says it was found he used a “synthetic testosterone.” I’m not sure if this is a catch-all phrase for all kinds of testosterone supplements, or if it means a special kind. No word on whether they found any TestoGen in his system, but we’ll see if more details come out.